A Robot Lawyer and Robot President: Considering a World Run by AI and Big Data

The concepts of robotics and artificial intelligence are often mixed in technology development forecasts. People imagine that robots will replace lawyers, clerks, and even high-ranking officials. But robots are often considered to be mechanisms allowing people to automate a particular process, while artificial intelligence is able to make major decisions. Thus, Big Data processing technology and machine learning are at the heart of the progress that will free humans from routine.

A key factor in automating professional functions would be the use of Big Data, based on which AI would make decisions. Law is one of the priority areas for the introduction of AI. Working with Big Data already allows an idea of the potential development within the legal sphere. For example, the software used for automated analysis of a large number of specific judicial precedents and world court practices could help in the prediction of a court decision for single cases. On the other hand, the analysis of a large amount of socio-economic data could allow the prediction of emergence of controversial situations or the need for new regulators.

Online justice and, in general, “digitization” of the legal practice would significantly save lawyers time and ensure the involvement of the most competent and unique specialists in the industry. With new automation tools, people’s work would be limited only to responding to online monitoring results and AI tips. Talking about the development of AI automation systems, experts predict the further wide distribution of solutions based on the analysis of Big Data which would be able to give people clear instructions for actions in certain situations (low-quality products in stores, accidents, conclusion of contracts, and much more).

However, AI would not be able to completely replace lawyers. Rather, automation of routine functions and processes related to office work and the implementation of simple, single-variant actions would most likely occur. Today there are many automated systems for the preparation of contracts, dispute protocols, and other documents. More informatization allows going further and creating an automatic system for drafting court decisions.

As a result, lawyers would serve more as consultants—they would help choose the most convenient variants of behavior. But the legally significant decision itself would be prepared by a smart system based on the principles of a neural network. A lawyer would only agree or correct the draft of a legally relevant document.

Is absolutely honest digital justice possible? If we imagine that a judge impartially considers two similar (at first glance) cases, for example, theft, when a person stole food to save his children from starvation, and when a thief stole a pension – the last savings from a single elderly woman. What decision would AI make? It would probably bring the accused to around the same level of justice. After all, they would both be considered thieves from a legal perspective. It is unlikely that the program would be able to understand the difference between two different ethical situations and take into account additional factors. Of course, AI could be an impartial judge because a developer sets the program algorithm as such. It is enough to include an indulgence adjustment in the program code, for example, to representatives of authorities or to take into account certain patterns of human behavior. But the problem is not how well AI can handle court cases, but in the credibility of the people writing the code. 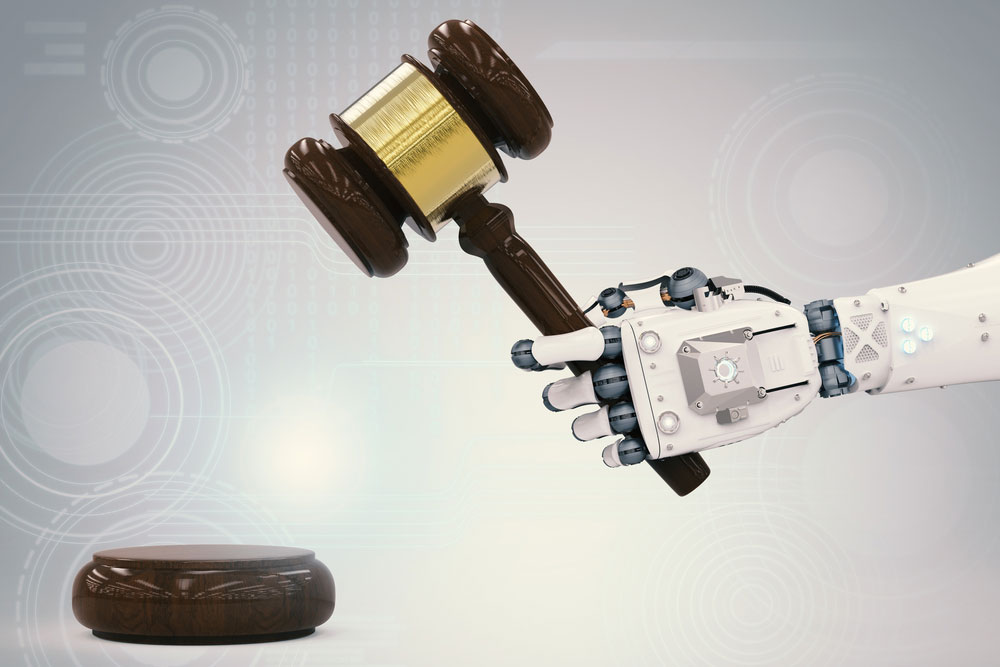 AI as a Consultant

It is still difficult to entrust AI with the judge’s mantle, but it already does make an excellent adviser on key issues of jurisprudence. Artificial intelligence can use ready-made samples developed by humans, or be guided by certain criteria that serve as conditions for decision-making. For example, a person who got into an accident could address a lawyer for consultation. Another example – a simple dissolution of a marriage without sharing property and issues with children. A woman or man only needs to know what has to be done in order to dissolve the marriage and what actions to be taken.

This option is real and has already been implemented in most mobile devices. Ask a question to the voice assistant in a smartphone, and it will offer you answers based on online results. This is a counseling system based on the capabilities of artificial intelligence. Based on the same principle, a robot lawyer could also be created.

In the age of robotics and smart technologies, AI could replace the many functions of a lawyer. But this applies only to repetitive and routine tasks, such as court claims by Sberbank of Russia, which, by the way, plans to cut about 3,000 lawyers. In the case of non-typical, non-standard situations, the program would not be able to replace a human lawyer who has not only legal knowledge, but also a creative mindset and code of ethics.

To hand over the reins of state power to artificial intelligence is both an interesting, and dangerous idea. The main state position involves not only responsibility, but also a certain flexibility of thinking—the ability to work in unusual situations. Today, AI is not able to effectively solve global economic problems and manage people. Experts believe that the president is the face of the state, and it must be human. The issues of trust to a program remain. What if the AI president starts a war? The scenario from the science-fiction movies “Terminator” or “Matrix” may become real.

Blockchain and artificial intelligence are undoubtedly breakthrough technologies. At the same time, quantum computations are developing very rapidly. If scientists succeed in combining all these achievements together in the future, then we would receive unique software solutions that could solve many complex tasks.