At Artezio, Healthcare is one of our main areas of interest and expertise. Based on our observations and practice in building Healthcare apps, mHealth is seeing rapid growth due to:

Let’s take a look at the market data and see what kind of conclusions we can draw from this trend (given the uncertainty the market is experiencing at the moment).

In short, mHealth is projected to keep growing, seeing more and more active users globally. In 2020, the market size for mHealth was valued at over $45 billion. The COVID-19 outbreak, however, triggered a drastic surge in market size, which is now projected to reach $100 billion (Statista) by the end of 2021 – a fivefold increase from $21 billion in 2016. North America was the dominant regional market in 2020 and accounted for a revenue share of 38.8%. 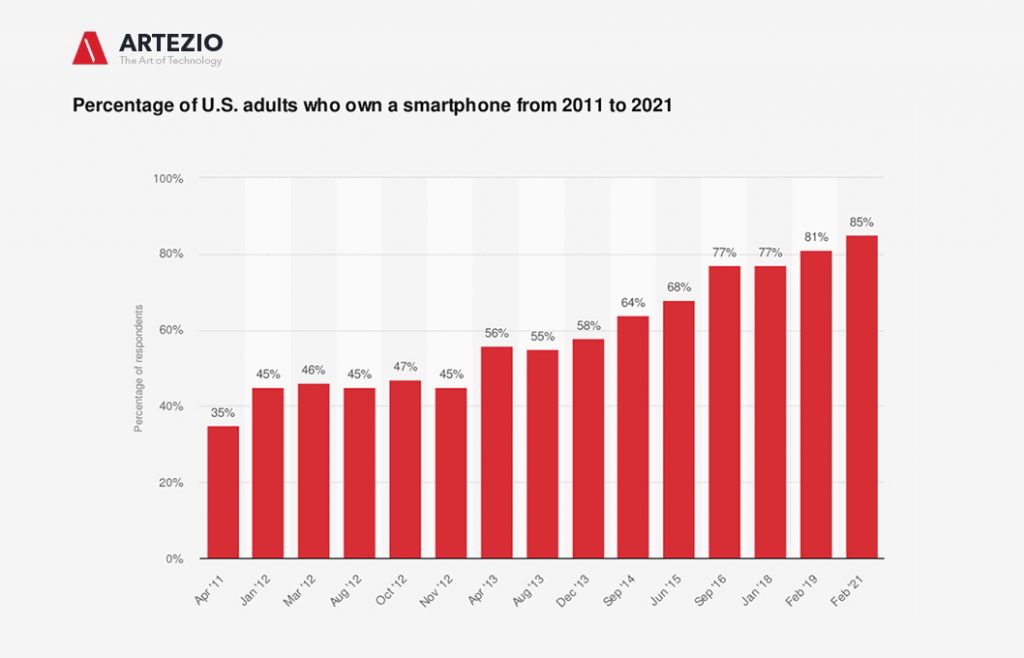 What are the major market drivers?

How many people actively use smartphones worldwide?

Today (as of July 2021), this number hovers at around 6 billion and is forecast to further grow by several hundred million in the next few years. China, India, and the United States are the countries with the highest number of smartphone users.

The United States had one of the highest smartphone usage rates in the world, with 81.6% of the population using a smartphone as of September 2020.

Outside Western Europe and the United States, smartphone usage is the highest in South Korea, as more than 76% of the population uses a smartphone. Japan is a notable exception to the 70% line, with penetration rates just under 60%. 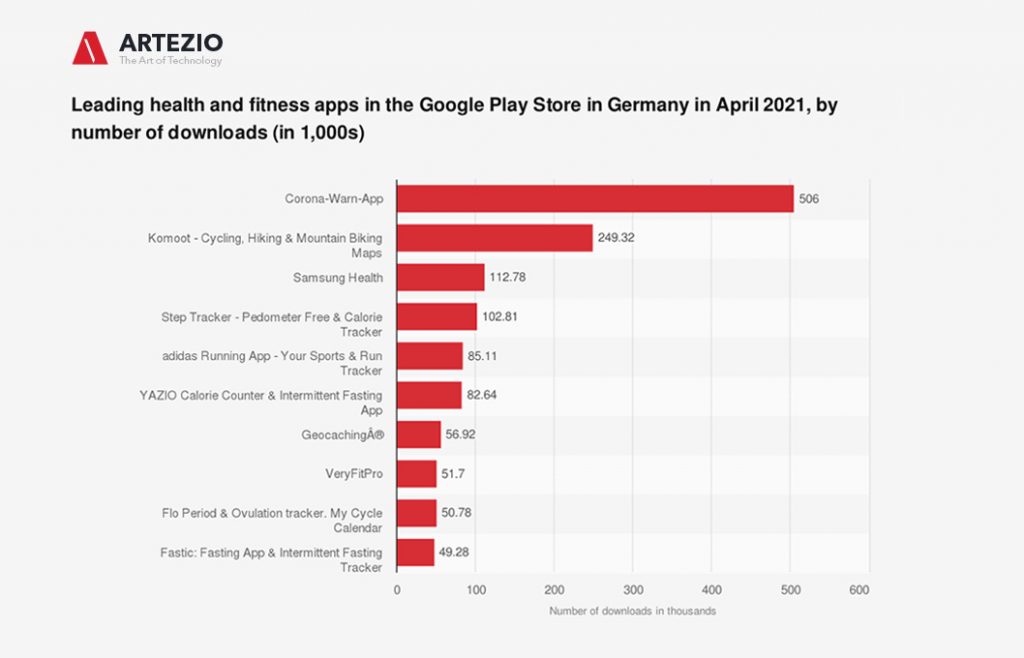 Thus, based on this we can conclude that the smartphone market is more than healthy and mHealth has the opportunity to become increasingly popular.

Current situation with mHealth solutions on the market

Now let’s take a look at healthcare apps in general. In the first quarter of 2020, there were around 53,979 mHealth apps available on the Apple Store and 53,054 healthcare apps at Google Play worldwide.

From the start of COVID-19, the number of healthcare app downloads increased by 65% worldwide and by 30% in the US during its peak month of COVID-19 compared to January 2020.

South Korea had the highest growth, with a 135% increase in downloads comparing its peak month of the pandemic with January.

What’s more, the State of Mobile 2021 report demonstrates that the boom in health and fitness apps was sustained throughout the year, while physical workout apps dominated the new app arrivals. Mental health app Calm came top in terms of consumer spending for 2020. 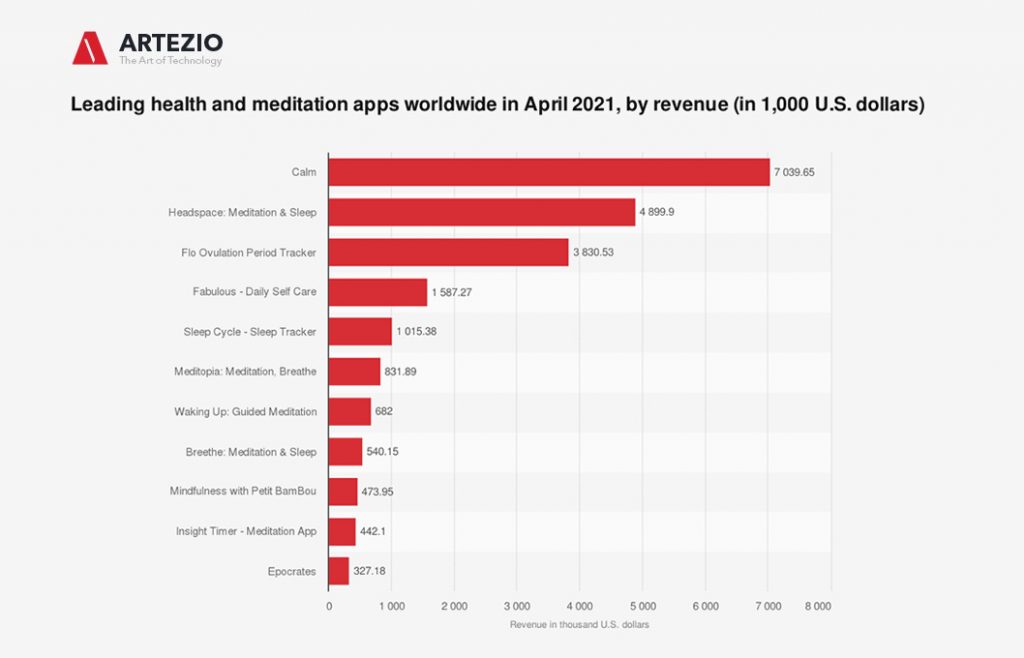 Mental Health apps were top-of-mind this year as we adjusted to our “new normal.” In the U.S. from November 3 to November 5, 2020, the leading mental wellness apps were installed 215,000 times in United States. As of 2020, mental health as the mHealth sector had the highest investments in the United States with $252 million.

Many health and fitness apps are either linked to specific activity trackers, such as Fitbit devices or Apple and Samsung smartwatches. They also provide users with tracking and workouts regardless of other digital devices. During a March 2018 survey, 42% of U.S. adults stated that they used some sort of digital technology to measure fitness and health improvement goals.

Only 8% of US adults over 50 years old said they would share their digitally-tracked health information on social media.

COVID tracker apps are also featured, and that is likely to continue into 2021. With over 150 million downloads, India’s Aarogya Setu is the world’s most downloaded COVID-19 contact tracing app.

Within just 13 days of its launch, Aarogya Setu has been downloaded by more than 50 million users and has become the most downloaded app in the world to track Covid-19.

The number one app by number of downloads in Germany was Corona-Warn-App with roughly 506,000 downloads onto German devices according to data published by 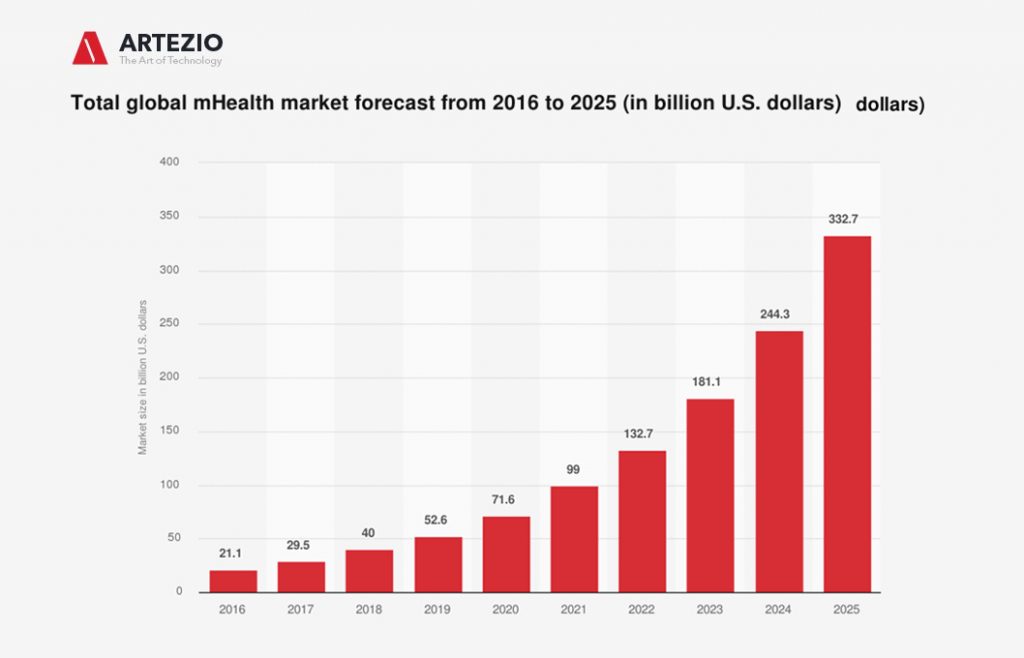 Needless to say, the prevalence of mHealth apps and the rising competitive background signal that the demand begins to outpace the supply, thus inciting more and more healthcare businesses to consider their own mHealth solutions and apps.

What awaits the mHealth domain?

Now that we’ve seen that the situation worldwide is ripe for new mHealth solutions to enter the market and help healthcare vendors to provide better, faster, and more efficient healthcare, let’s see what kind of future likely awaits mHealth globally.

The statistic below displays the projected mobile health apps market size in the United States from 2018 to 2025, by type. The market segment for medication adherence apps is predicted to reach some 3.5 bln. U.S. dollars in 2025.

Mobile health apps market forecast in the United States from 2018 to 2025, by type 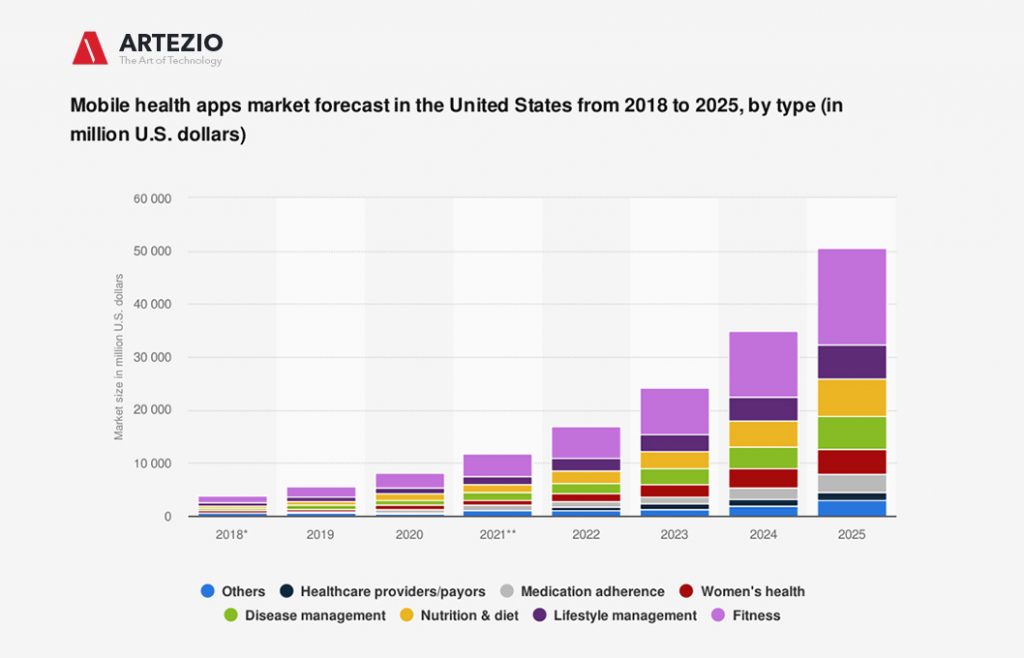 Factors like rapid growth in the usage of smartphones, developments in coverage networks, increasing prevalence of chronic diseases, and rise in geriatric population are driving the market growth in North America. In addition, the rising demand for health and analytics solutions has led to increased adoption of such applications by healthcare providers. Increasing cases of chronic conditions requiring remote monitoring and treatment also boost the demand for mobile health platforms.

Industry experts believe that by 2030, mobile apps will have become firmly embedded within standard treatment protocols for the majority of diseases and conditions, and widely used in preventative care. Their adoption will bring many benefits, including improved quality of care, increased patient engagement, and reduced costs. mHealth will at once make healthcare far more personalized and intimate while also providing clinicians with a stronger foundation for scientific evidence-based decision-making.

Some statistics and facts about Healthcare:

It should be noted that IT in healthcare is heavily regulated with a whole variety of standards, such as HIPAA, CCPA, GDPR, SOC 2, ISO 27001, and others. It means that if you are looking to kickstart a mHealth solution for your patient base, the healthcare standards must always be considered during the planning stage, as these affect the development process greatly. What’s more, mHealth solutions cover multiple mobile OS systems – Android and iOS being the majority, and proper development of apps for these systems simultaneously require additional resources and planning.

All in all, the industry is booming, and it’s not really a secret. In the future, we can only expect more and more interesting projects to enter the mHealth market and provide new, quality benefits to doctors and patients alike.

Get in touch with us to learn more about mHealth development costs, details, and success cases.

Thank you for reading!